Rushen Heritage Trust are delighted to announce the winning entry for our 2018 Charity Calendar Competition, where we asked people to take a walk along one of the routes on the app and snap a photograph for their chance to win £100 in gift vouchers of their choice.

Over the past two weeks, people from across the island - and even as far as Canada! - have been voting for their favourite photograph from the 35 stunning entries that we received. We are now delighted to announce that Lucy Matthews from Colby is our winner, who entered a photograph of her dog Darcey on a walk at Bradda – one of the waypoints on the Port Erin route on our walking app.

“I am by no means a professional photographer and I have no experience of using professional equipment,” says Lucy, who was thrilled to be told that her entry had won. “This photograph was taken using my iPhone camera whilst taking our rescue dog Darcey for a walk. I turned to see her close by, the sun breaking through the clouds and suddenly there was an amazing view. I quickly aimed, snapped and hoped for the best. It wasn't until I came home and took a look at the picture that I thought it was a pretty good aim! I had it printed and framed and it is still my favourite photograph.”

The entry received a staggering amount of engagement on social media and received 24% of the overall votes, so it was a very clear winner, but when we asked Lucy where she would like her prize vouchers to come from, she had an unexpected answer.

“We adopted Darcey in December from a charity called Amicii, who rescue stray, abandoned and abused dogs in Romania. Volunteers work tirelessly to save as many dogs as possible and through fund raising, sponsors and donations are able to spay, neuter, treat, care for and send as many of their dogs to foster carers and adopters in the UK and on the Isle of Man. I think it is only fitting that in lieu of gift vouchers the money be donated to this charity. After all, if it wasn't for their fabulous work we'd never have adopted Darcey and she'd never have taken me for a walk that day – so a big thank you to everyone who voted for my photograph!”

Lucy’s photograph will appear on the front cover of the calendar as well as on one of the months inside. We also had eleven runners up who will all feature in the calendar too and will also receive a free copy of the calendar.

The Isle of Man Walks app was officially launched last October with three heritage walks in Port St Mary, Port Erin and from Port St Mary to the Sound along the Raad Ny Foillan, where special beacons have been placed at specific waypoints along the route. After downloading the Isle of Man Walks app to their smartphone, walkers are able to access photographs, films and audio pieces about the local area – from facts about wildlife and nature to memories of history and heritage. The range of stunning entries we received as part of the competition shows just how beautiful the walks on the app are. We also hope that the app will help to preserve local heritage for residents and increase tourism in the local area.

“I believe Lucy richly deserves the top prize of the photographic competition as she has wonderfully captured the essence of the beautiful south that is Rushen” says Hon. Laurence Skelly MHK and one of the directors of Rushen Heritage Trust, pictured here with Lucy and her dog Darcey. “I would like to thank everyone who entered the competition, which was clearly a very high standard and encourage the general public to continue snapping and sharing their photos of Rushen via our Facebook and Twitter accounts.”

The Isle of Man Walks Calendar is now available for pre-order in our online shop and all proceeds will be used to develop more walks on the app and create new features for the local community to enjoy.  ​ 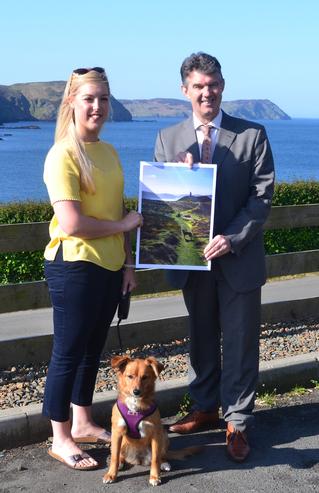 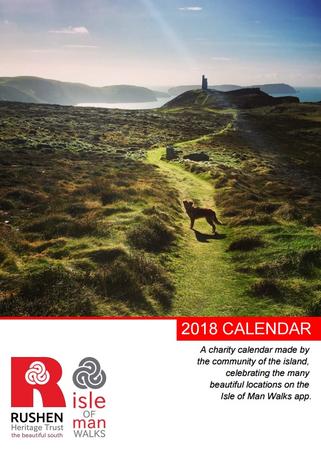 By using this site, you signify that you agree to be bound by these Terms of Use.